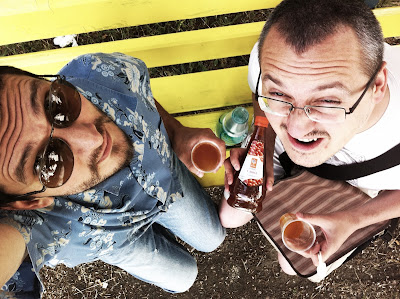 If compared to their biological age, D & F know each other for a very long time. More than half of their lifetime. Since the proverbial times of the "Circle of Calculators", first local official assembly for geeks in Timisoara.
Their bond become even stronger once F tried to double the size of D's hard disk using some occult software of the time. It was a failure and so D was forced to initiate himself into the ways of the system reinstallation.
More data was exchanged in high school years. Not an especially productive time but the taste for experimental (self) education was growing. Amiga, C64, Borland Pascal & autoexec.bat comes to the mind … Still, the period ended with their first attempts regarding creative output. F was tracking on Amiga and D was … doing something in illustration.
University time arrived and the spirit of continuity prevailed. Inspiration and vision were increasing. Also, their common but individual weird aura did too.
F went public and joined TmBase as a founding father. He got himself a gang and started raving as Urban Experience. Visuals stroked him too and a bit later went even more astray, sounding cinematic as Makunouchi Bento.
D went towards the within. Emotionally and philosophically. He practiced ambient facing his room wall for some years (he was not aware of Bodhidharma yet). Studio work only, albums releases as Thy Veils and sparse public gigs as others guest. Then he went photographic and become a video man soon enough.
There is no archeological proof but D & F went into improvisation at the same time. D did so after a trip to New Zealand (and, once back, he quit his job, joined one more group, started releasing even more, made installations and went mainly live). F's transition is undocumented.
The last years can be characterized as most active in all aspects. Both increased their artistic research in various experimental fields and their skills were upgraded as never before. The new, uprising wave of mobile music scene focused their interests upon same topics and same touch screens. Still, one most important thing was never satisfied: they never performed together. But this is not a problem anymore since this year's Simultan Festival will host their first live collaboration. The two will deliver a real-time improvisational storytelling performance along the not-very-accurate remembering of a "sonic memory system" that D developed for his collaborative Ars Electronica installation. A continuous, postdigital audio-visual flow containing all their tricks will flood the Synagogue of Timisoara, this October.