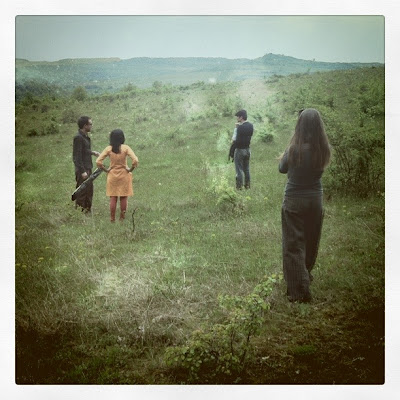 from the press release
7 September 2011
"About the content of this (cover) image I cannot say more that I captured it while my friends were kiting and suddenly they focused on some invisible point in space. No one remembers exactly why but I recall the atmosphere on that small hill, it was similar to that of the title song. But the title song itself is not much related to that hill. In fact, the music was performed one year before, in Pecs (Hungary), during the HeadPhone Festival. I was enjoying the great company of Petre Ionutescu and his trumpet and Ciprian Costache (you can see him on the cover, the young man on the right side) and his screwdriver technique, subtly unleashed upon his guitar. We did this jazz-ambient sound-flow by improvising along a generative structure that I was controlling in real-time while processing their output through two Korg KaossPad3 units, to be more precise. Later, the recorded sound reached the ears of Attila Lukinich and he adapted it for speakers without hesitation. After that, the song got a video to mach. Spacelove, the second title on this release, is a piece I've created using the sounds of Memories Of Now, a generative audio-visual installation I made with Michaela Konrad, featuring Eugen Neacsu. This multimedia artwork is currently in permanent display inside the Ars Electronica Center in Linz (Austria) and we presented it's new, updated version just 2 days ago by participating in the Ars Electronica Festival. A new video is under construction, documenting this new live presentation and I'm pretty sure it will be online 7 days from now."
at 9:37 PM